I recently explored some boulders near Lower Yosemite Falls and found and climbed some fun "new" lines. Some of them may have been climbed before, but it was a bit hard to tell.

I've been thinking about different ways to share information here on BetaBase, and on this trip I experimented with the GAIA GPS app and iPhone photo markup. Hopefully, you will find this method informative and easy to use. 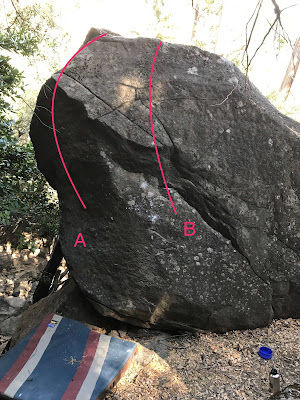 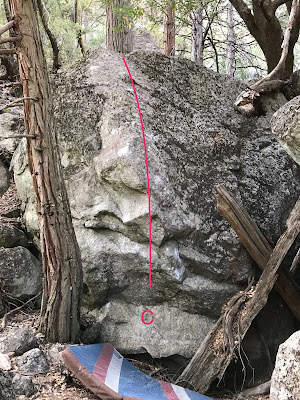 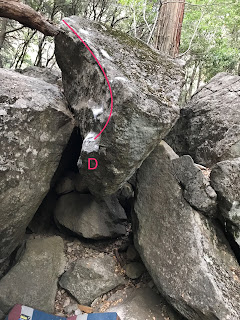 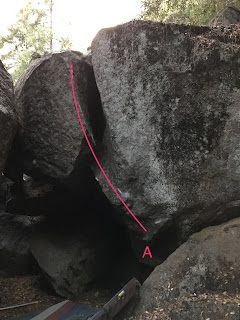 A: Crusty, v5/6; Sit with good undercling, climb up and through offwidth, and a chockstone finish.
GPS Link 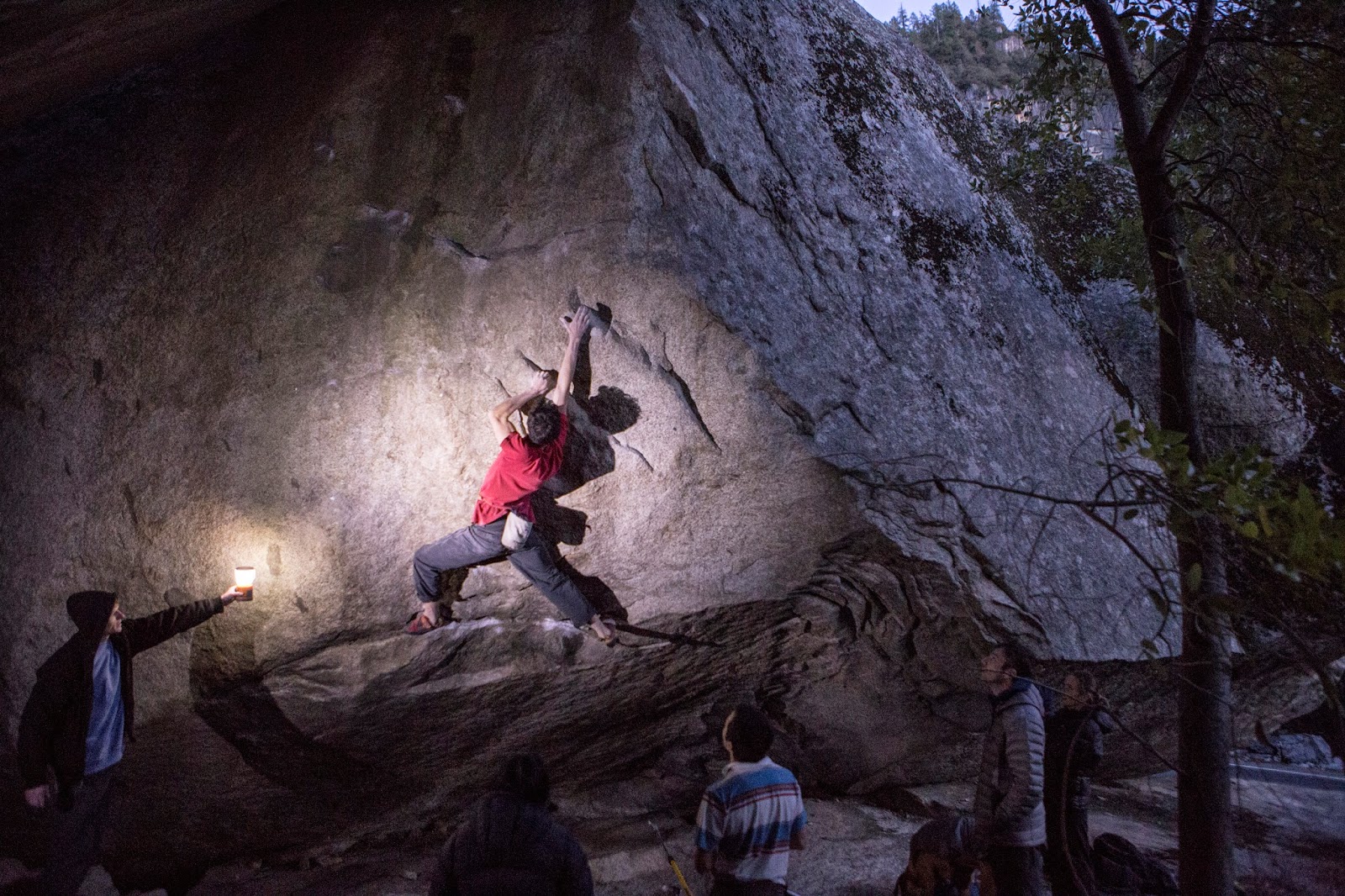 Keenan Takahashi on the first ascent of Zephyr, v12 (photo: Spenser Tang-Smith of the RV Project)
Yosemite has been a place that people have been bouldering for more that 50 years.  How can it be that half a century later, world class boulder problems are still being established?  There are many factors, including the use of crash pads, but one factor may be that the older generation of enterprising climbers just weren't tilting their heads high enough.

It seems that the new vanguard of boulders, with limber necks and unbridled enthusiasm, don't seem to mind topping out boulders with 30 feet of air between their heels and the crash pad "landing."  An example of this new Vanguard is Keenan Takahashi and his new skyscraper of a problem, Zephyr, v12.

Located in the Crumbs, and just a stone's throw from highway 140, this problem starts at an obvious head-height rail.  The crux moves are right in the beginning, a v11 bulge on angled sloper rails.  Then comes a technical face, checking in at v9; but that just leads to the mental crux, a balancy and slopey v7 arete encounter with your heels easily 25 feet above the landing.

For the record, Keenan didn't give the problem a grade, but in our discussions, v12 seemed to make sense to me. It will be interesting to see what other ascensionists feel. 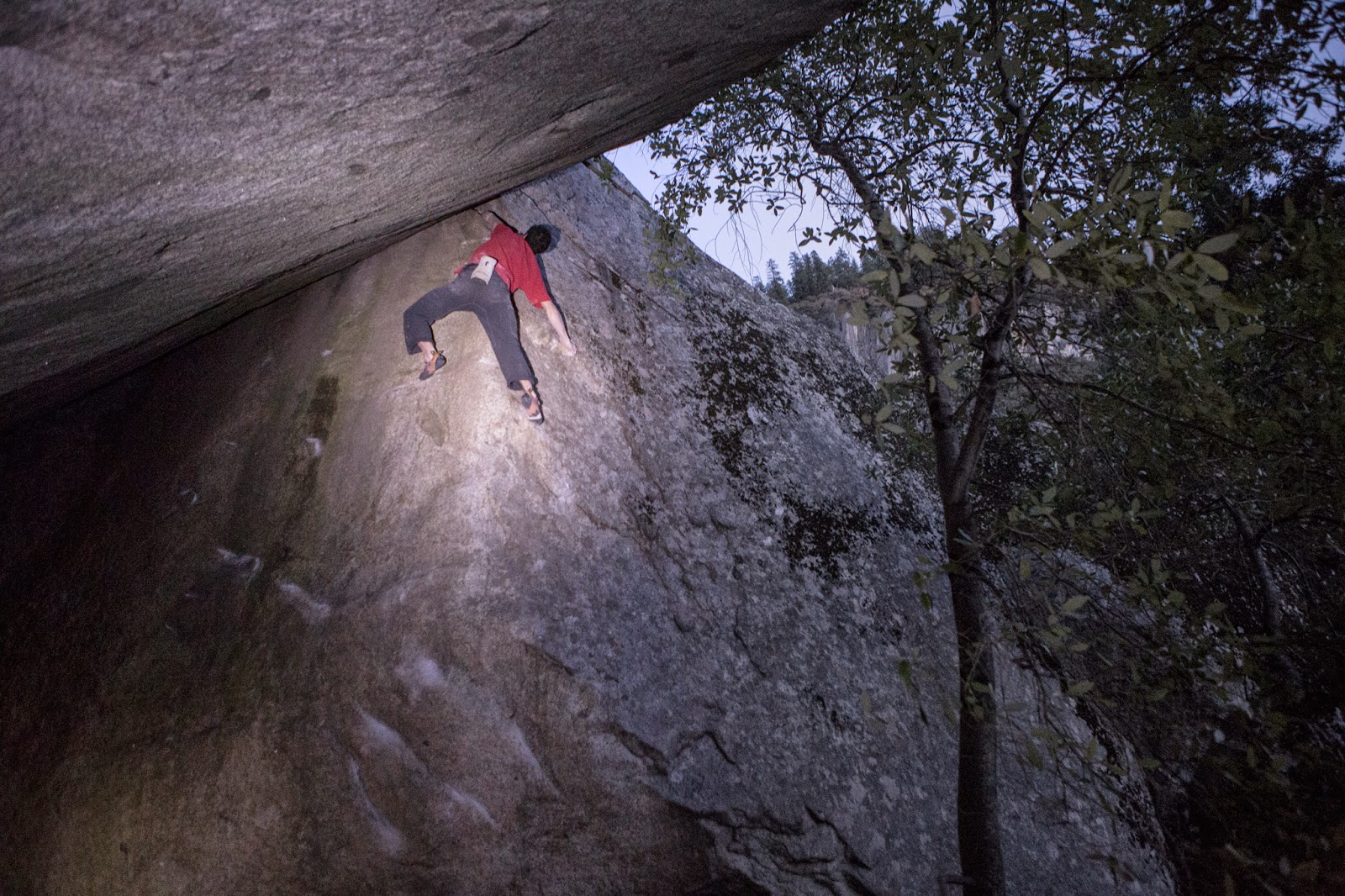 Keenan on the mental crux, a tricky v7 arete encounter
ALL PHOTOS: Spenser Tang-Smith of the RV Project

Happy New Year, here is one of the better new problems put up in Yosemite recently.  Put up last year by Southern Nevada Bouldering guidebook author Tom Moulin, The Rift follows and obvious rib facing the road on one of the "Big Three" boulders at The Crumbs.

It starts on an obvious square-cut jug in the low rail, climbs up to a tricky lip encounter, and then finishes on a balancy arete feature with great slopers.  To add a little spice, the last move is a committing reach to another square-cut jug.  Everyone I have seen do this climb, has done it slightly differently, and Lyn shows good shorty beta in the video.

I also put up a right start, which starts sitting on the right arete and climbs into The Rift at the lip encounter.  I called it Schism and it seemed a shade harder (v9?) and while it is not as direct at the original problem, the start moves are fun none-the-less.

To find the problem, look to your left as you enter The Crumbs, the bouldering area below the Cookie Cliff.  The Rift will be plainly visible, just be careful as you walk in, as there may be a bit of poison oak surrounding the landing.

To stay with the recent theme, here is another problem from the Horse Trail.  Located just on the north side of the trail between Cerberus and 1-inch Punch, this technical and slopey problem has a spicy finish.  Definitely better to try in the shade and with a good spot for confidence.  There is a boulder in the landing zone that can be disconcerting, but I never have seen anyone fall on it.


Here is another blast from the past.  Out on the Horse Trail lies a hidden gem amongst the trees.  This was a team affair, as I did the right exit, Randy Puro did the left exit and Justin Alarcon did the middle (direct) exit.  Hence the name Cerberus, or three-headed monster.

The problem is located on the Horse Trails in the general area between Kauk Face and Raggedy Anne.  It is up the hill from the trail, so it may take a bit of hunting around.  Well worth a search.  For the less adventurous types here are the GPS coordinates: 37.745549, -119.564260. 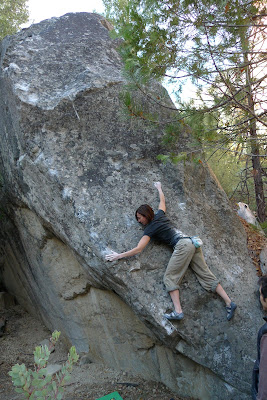 There was a previous post about the cool boulder problem Hero, v8 and there is a cool problem to the right that was not mentioned.  If you don't feel like being a "hero" you can bust right onto the slab for a more technical option.  It is still v4, and the upper bit is pretty thin, so you may still need to perform some "heroics" to top out...

It should be noted that another cool problem is nearby - towards El Cap.  Scott Frye's Army (SFA) is a tricky face climb also established in 2008.

BetaBase is officially out of hibernation mode, as things are starting to cool down a bit.  There is some catching up to do with old posts, and here is a video of beth climbing Deliverance, v8 at the Lost Boulders.

There aren't too many hard crack boulder problems in Yosemite.  In fact, there are basically 3: Bachar Cracker, v4; Deliverance, v8; and Sasquatch, v11.

After a bit of a hiatus, Joel Ruscher is back in the game.  A few weekends back, Joel nabbed the first ascent of this cool squeeze arete.  As you may have gathered from the name, the climb is deceptively simple, and you feel like you could stick the pinch every go (until you don't).

The problem is located just to the right of the Infamous Dark Crystal problem at the Ahwahnee boulders.  This time, we have video proof...
Posted by Raza at 10:22 AM 1 comment:


Most scientists discount the existence of Bigfoot (Sasquatch) and consider it to be a combination of folklore, misidentification, and hoax rather than a living animal. [wikipedia]

Much like Bigfoot, ascents of Sasquatch are rare as it is one of the hardest pure crack boulder problems around.  Our visits to the valley have been rare as well, after our son was born - but that is a different story.

Randy has been on a tear and sent Sasquatch last December.  It must be hard at his point for home to find established boulder problems that he hasn't done yet.

If you are feeling like a stone master, go to the back side of the LeConte boulder to test your mettle.
Posted by Raza at 7:23 AM No comments:


Since it seems that Pinball Wizard has become fashionable again, I thought I would post a video to update the original post, which only had pictures.  Pinball Wizard is a climb that demands more skill than strength, and many people will find it difficult to trust the smear at the crux lip encounter.  Don't let the name scare you, I haven't seen anyone bounce of the back wall...yet....